Im writing this post as much for myself as anyone else, to have the chance to get my thoughts down succinctly. Read on:

There was something strange, yet beautiful about seeing flowers & weeds grow over the remains of Ancient Rome—a vivid reminder, ‘from dust you came and to dust you shall return.’ Makes you think, who will be singing your praises in 2,000 years? A reminder to focus on the things that ultimately matter. Sometimes remembering we are going to die is the best way to remember how to live. 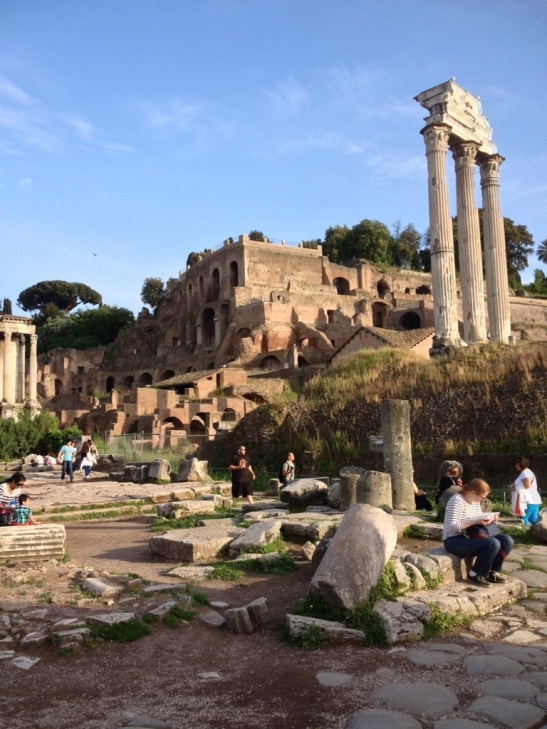 Only looking back do I really appreciate the achievement. Now I understand why people looked at me like I was crazy saying I was biking to Rome. I was crazy. I’m reminded that the purpose of a goal is not always to hit the goal, but about who you have to become in the process in order to hit the goal. For example, my first day I biked 44mi and was scared to camp wild; the last day I biked 93mi and had no problem camping wild. Crucibles beget personal breakthroughs.

I didn’t get here on my own–a lot of people over the last 21yrs influenced & helped me get to the starting line, and encouraged me on the way. Very grateful for fate and family’s prayers for smiling down on me. (No flat tires!) Personally, I think the idea of being blessed is somewhat vain, but absolutely I am fortunate. To whom much is given much is expected. Just as Steve Jobs went to India, maybe this is all part of my journey in life—trade Jobs’ LSD for my adrenaline.

I experienced a terrific balance being able to say to myself “I don’t know what’s going to happen next, I don’t have a perfect plan, I’m living this thing hour-by-hour.” Contrasted by the freedom brought by the belief that whatever happened, I’ll get through it, to be able to look up at a mountain climb and say, “If that is my fate, so be it.” I was never motivated to climb a pass, really never inspired, but I had the grit & resolve to get to the top. Rather than being a question of “Can I?” It was a question of, “If the only person it’s up to is me, why wouldn’t I make it to the top?” As the soldier, explorer, and President Theodore Roosevelt remarked, It is hard to fail, but it is worse never to have tried to succeed. 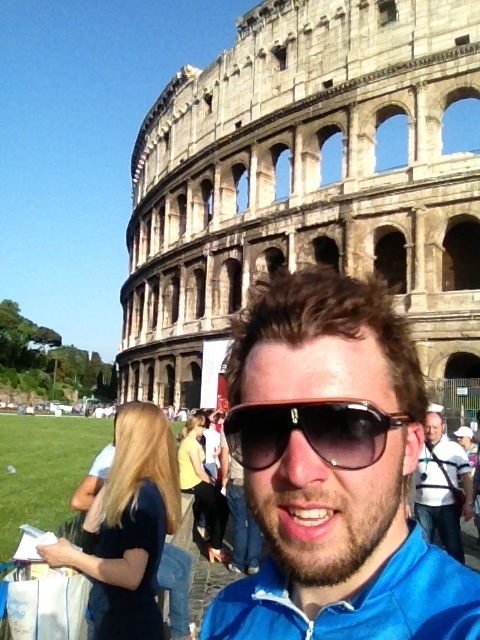 The certainty that I would get to Rome was terrifically freeing. Yes, there were moments I was frustrated – there were whole afternoons I struggled. But I had committed to the outcome so much that I felt like it was a done deal. In fact, when I got to Rome it was both surreal – like “holy cow I freaking made it! – and sort of a shrug of the shoulders, “Cool” moment, because I had thought so many times about the moment of biking up to the coliseum, that in my mind, it had already happened. Let the record show that you won, or that you lost. But don’t let it show you never swung the bat—you just might knock it out of the park. 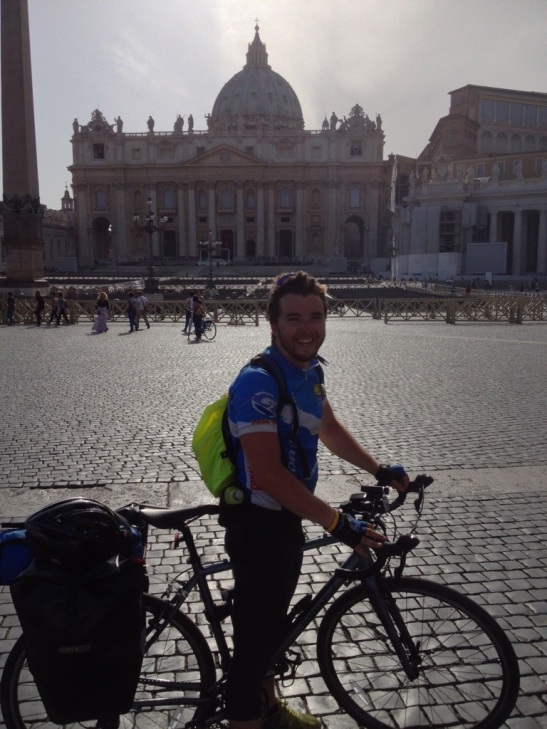 A true friend is someone to whom you can say, “Oh, you too?! I thought I was the only one.” That’s the power of Warmshowers.org—an instant connection & bond over bike touring. The people you meet and the friends you make along the way – on a travel adventure, and in the adventure called life – truly make the journey. From the man behind hamburger stand my first day in France, who, sensing my hesitation while ordering, warmly said, “It’s okay, we can speak English,” to the family who owned the Grenoble organic goat farm, that I didn’t realize I was supposed to eat dinner with, or playing Jenga at a bar in Finalborgo, Italy, with my chef-host & his friends. The host in Rome who flipped me the keys and said, “Just make sure you lock the door,” (After hosting over one hundred people, he’s pretty trusting apparently, or my hosts in Innsbruck who made dinner and breakfast, helped me sell my bike, let me stay an extra night when I messed up buying train tickets, and paid for my beer when they wouldn’t take my credit card. Side note, never be the guy or gal who pays for a beer or coffee with a card, it’s rude to the business & the people in line behind you.

In March I was at a club late at night in Budapest, watching as a man tries to buy a drink for last-call with his credit card, and the bar doesn’t take cards. He frantically asks me if I know where an ATM is. I replied, “Here’s some cash, go buy a beer. Just promise you’ll pay it forward in the future.” That was an admittedly small act. I always felt like the people I stayed with did so much for me; that there was no way I could repay them to make it a win-win. I think it’s time to make some deposits in Karma Bank!

Stop in Innsbruck, Austria on the way home:

I sold part of my life. The bike is gone. That adventure is over. No more packing my saddlebags every morning. No more finding a quiet place to stop and rest, or an out of the way spot to pitch a tent. Ten years from now – hell next month – I’m going to wish I could hop back on that bike and take it for a spin. I’m going to wish I could climb the Col du Lauteret pass again. This time, I don’t have to wonder if the trip really happened, or if it was just a dream. I viscerally experienced the struggles on the bike, waking up in the middle of the night because my legs ached so bad or my hands had gone numb as a result of minor nerve damage from riding. The adventure was part of me. And that makes it all the harder to let it go.

I wished I could get the bike back, three hours after selling it. I was scared, I had no money in my account and no way home. I had slept in the Innsbruck train station two nights in January, and was not looking forward to being stranded there any longer. I’m not proud that I sold it. I realized it was a great lesson & vowed to never be in that position again–to have to sell something that was so part of me, was so ingrained in who I was because I needed cash. Think twice before you sell something part of you, or sellout your life. It’s important to hold onto things that have a major impact on our life.

Now that I’ve been relegated to pedestrian status, I’ve realized my happiness is on my bike. Sneaking bikes on trains, selling it to buy a flight with cash thirty hours before it leaves, poaching McDonald’s wifi, wandering around a town clutching a bag of cookies & a fresh orange, these are the good days. If we can’t repeat the past, can’t live it again, can’t get it back, then we just have to make sure every new adventure is bigger than the last. Dance with your fears. Set the world on fire with your life. This is just a switchback in my life, and not my summit.

Passport is a little warped from biking with it, positive problem!

PS Loved seeing these kids with their bikes 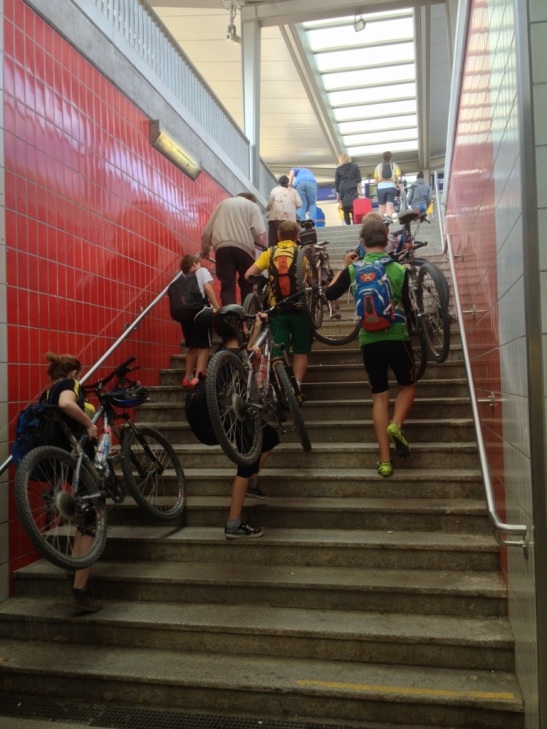